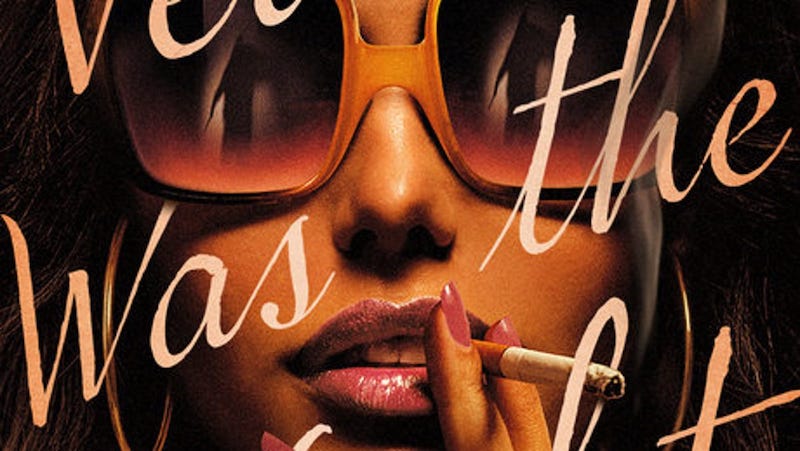 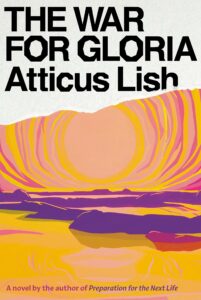 “Lish not only invokes, engages with, and subverts the modes of the Hollywood Boston Gothic—he dives headlong into them … Lish is an exquisite set piece writer, but the power of his narration [in Preparation for the Next Life], mostly in third person, except when one of the pair breaks out to tell a story in their speaking voice, comes from its restraint in the use of free indirect discourse. We may be inside their heads, seeing what they see, but their thoughts only come to us sparingly. Relentless access to the internal effusions of literary characters is so common in American fiction that Lish’s technique has a special force…The effects are masterful, cinematic in the best way, with marks of the influence of DeLillo, Hemingway, and ultimately Gertrude Stein. Concrete realism is sometimes the term used for this style. Lish’s sentences are carved out of granite. At the sentence level, the same can be said of The War for Gloria. But the book is an unstable hybrid, unbearably poignant until it turns improbably pulpy, pitting a set of intricate characters against a pair of villains who seem to have escaped from a caricature factory managed by Charles Dickens in Hell … The real war in this book may be between genres: elegy and bildungsroman on the one hand and gothic thriller on the other. The clash is fascinating … what a strange genius, this author, of a novel full of such tenderness and violence, such oedipal love and oedipal rage.”

“Frances Wilson, who has been quietly in thrall to the novelist since she was a student, does not grill him lightly over charcoal; not for her the righteous disgust of Kate Millett … Nevertheless, her book is a highly flammable thing. If its subject is a crazed prophet, sex-obsessed and violently contrarian, who stalks Bloomsbury drawing rooms breathing fire all over everyone he meets, her own style is hardly any less combustible … I cannot recall when last I felt so uncertain of a book’s essential merit, so confused by its intensity, its digressions, the way it disappears down wormholes. But equally, I cannot remember the last time one left me feeling so exhilarated, so challenged and absorbed. Will it restore Lawrence’s reputation? Will it make people want to read the old fox again? I’m not sure it matters if it doesn’t. Burning Man is a work of art in its own right, as wanton and as magnificently flawed as anything Lawrence ever wrote; an object lesson in all that can happen when literary passion is allowed to go completely mad in the archives … There are longueurs. I was bored and confused by the more than 100 pages she gives over to Lawrence’s escapades with Magnus. Were the two men lovers, or not? … But Wilson writes so brilliantly, and with such conviction. If you believe, as I do, that to live life well is to fail in ways that may be unimaginably huge, this strange and confounding book is for you.”

“Velvet Was the Night has little in common with the delirious Mexican Gothic. Its prose is lean, its characters are nobodies, its setting is urban, and there isn’t the slightest speck of the supernatural. But Moreno-Garcia, a bona fide literary chameleon, slips effortlessly out of the satin pumps of the gothic and into the beat-up wingtips of noir. The scary thing about this novel is how good it is … the way that war—not a world war, but the Dirty War between the government and its restive citizens—keeps erupting into their lives, forcing them to confront the reality of history and politics, keeps the novel fresh; in contrast with classic noir, this war refuses to remain hidden. The delectable cocktail that is Velvet Was the Night contains a generous dash of bitters, but the finish is satisfyingly mellow. It goes down so smoothly that it left me marveling at what kind of sorceress Moreno-Garcia must be as she reworks genre after genre, weaving in Mexican history and culture, satisfying familiar cravings without resorting to mere pastiche.”

“… brilliant, heart-stopping … reads like a thriller, a memoir and a provocative piece of literary fiction all at the same time … For those of us who were taught to revere Robert Browning as a writer of ‘serious’ literature, and to regard his wife, as just that—only his wife—this comes as something of a shock … Sampson tackles our misunderstanding of Barrett Browning by showing us the challenges she faced. Writing in the present tense, Sampson places ‘Ba,’ as her family and friends called her, before the reader in her full humanity, so that we puzzle over her problems, we are infuriated by the doctors who tell her not to write to preserve her health and we egg her on when it is clear that her father will not let her marry Browning. Sampson also guides us through what she has discovered and points out, with caustic humor, the irony of certain situations … These authorial asides are always helpful, often provocative and sometimes outright funny. Most importantly, they help Barrett Browning seem more alive, as the two poets’ voices often intertwine on the page … a vividly drawn exchange between a living poet and a dead one. Sampson asks questions that Barrett Browning sometimes answers. Sometimes, of course, she doesn’t, but Sampson’s questions keep the reader turning the page, as we want to know what the answers might be. Throughout this magical and compelling book, Sampson shows us that we, too, can speak to the dead, or, at the very least, we can listen to their words.” 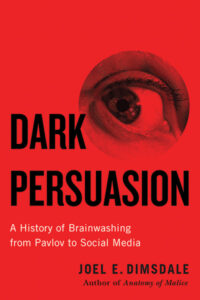 “We live in a time of mass persuasion, where disinformation flourishes on social media and vaccine skepticism jeopardizes America’s recovery from Covid-19. Lunatic conspiracy theories and fringe ideologies foster very real violence on the reactionary right, while marketers practice the art of convincing people to buy things at scales too vast to visualize. Dark Persuasion suggests that the language of brainwashing is incommensurate with the problems of our time, and a hangover from the era of America’s most paranoid wars … All these experiments proved was that it’s quite easy to destroy a mind with fear and lack of sleep; it is, however, impossible to then restore a person’s mind in a controlled way. No matter the extremes psychopharmacologists, behavioral scientists, and neuroscientists went to, the effects of trauma on the mind are simply too unpredictable to turn into a system. The idea, then, of ‘brainwashing’ was always a fantasy, born out of a paranoid and violent era in American history, and it blossomed in parts of the counterculture of the 1970s … Throughout Dark Persuasion, Dimsdale shows how the idea of brainwashing has been used to justify something much cruder: not the intricate manipulation of another person’s thoughts but simple abuse, whether conducted by the government or by the leaders of a cult. The term always had more political explanatory power than actual psychological basis. If it does have any real meaning, it is as a way of indicating a broader anxiety—about the threat of a hazily understood ideological foe.”

–Jo Livingstone on Joel E. Dimsdale’s Dark Persuasion: A History of Brainwashing from Pavlov to Social Media (The New Republic)