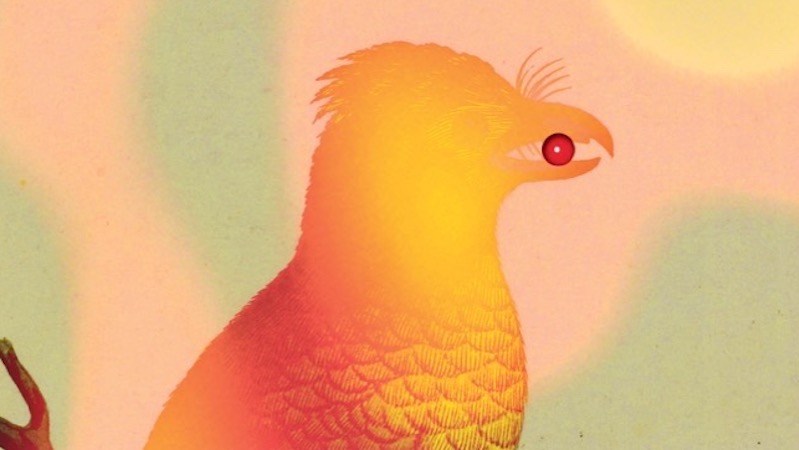 “Millet is energized…by how feelings are ‘intermeshed with abstract thought,’ with ‘our place in the wider landscape.’ Why, her work demands, are we afraid to die? What are the ethics of wanting what we want? … If both fiction and people are blinkered, self-stunned, perhaps they require a similar intervention. Millet, eschewing the arc of the private individual, also forgoes the novel’s traditional shape, in which tensions build to a climax. Her method is to churn up themes, generating a kind of mental weather, as if a book were less a trajectory than an atmosphere … Like Joy Williams, Millet uses fiction to elegize the collapsing biosphere. Also like Williams, she has a raunchy, fanged wit, often aimed at human self-delusion. Unlike Williams, though, Millet never lets surrealism darken into delirium, and her misanthropy feels circumstantial, not cosmic … In Dinosaurs, Millet transposes her signal motifs into a gentler key. The book’s large-scale catastrophe is only as obvious as our own—which is to say, ecological ruin lurks in the background, but the story clings to characters’ muted, often deliberately stifled lives … Potted summaries of Millet have a way of risking slander. Like A Children’s Bible, Dinosaurs is sharp and implacably funny; it evades the sanctimony you’d expect … Dinosaurs thus belongs to a cadre of recent novels that wrestle with the phenomenon of complex loss: grief that lingers after incomplete or ambiguous endings … evolution is only ever a possibility, never a sure thing. The novel is both aubade and vesper. It implies that some people can’t escape the prisons of who they are.”

“A grim fable … While the novel is stirring in its almost mythological simplicity, compelling in its portrait of deranged rapture, intelligently attuned to the seductions and self-delusions of false transcendence, it is also structurally clumsy, hindered by a climactic twist and mechanically staged stock characters … These same flaws afflict…the short fiction collected in A Ballet of Lepers. But unlike the early novel, many of these stories are built around striking images of frailty and desire … In his lyrics, Cohen took the melodrama and solipsism that plagued his prose and alchemized them into something more moving and mysterious. Once he turned to songwriting, Cohen set fiction aside. Perhaps it was a purely strategic decision, or maybe he ultimately understood that it was not his form. If the pieces gathered in A Ballet of Lepers testify to this, they nonetheless offer nascent glimmers of his inimitable artistic vision: intimate yet aloof, trembling with weakness even as it aches toward wisdom.”

“The more overwhelmed and exhausted we get, the more we seemingly owe it to ourselves to pursue ‘wellness.’ The more burdens we accumulate—children, aging parents, student loans, mortgages, anxiety disorders, bad backs, extra pounds—the more we’re urged to be well by way of still more effort: throwing out our plastic containers, cutting out lectins, practicing mindfulness, learning about environmental toxins, doing the research … Somewhere along the way, though, the thing that was supposed to help us heal ourselves became yet another obligation. And the stresses of the coronavirus pandemic only exacerbated what was already happening—the slow, immensely lucrative poisoning of something supposed to be a cure … Virtually anything can be curative if you think about it creatively enough, which is in part the quandary. ‘We have become a self-care nation,’ Raphael writes, ‘though arguably one that still lacks the fundamentals of well-being.’ The Gospel of Wellness argues that the industry has mushroomed in such a way because it’s filling a void that many people, and especially women, feel … Wellness puts the onus on the consumer to make up for everything modern society can’t or won’t provide; it extends the illusion of control … Modern wellness, at its core, is a self-sustaining doom loop of precautionary, aspirational consumption: Buy to be better to buy more to be better still. Which is why, despite Raphael’s arguments, I don’t fully buy that wellness has taken on the role of religion. Instead, in classically entrepreneurial American fashion, it’s become extra unpaid work—the very thing we don’t need more of and truly don’t have time for.”

–Sophie Gilbert on Rina Raphael’s The Gospel of Wellness: Gyms, Gurus, Goop, and the False Promise of Self-Care (The Atlantic)

“Miller’s novel subtly and morosely explores the crisis of Englishness that ties together events of the 20th century with those of the 21st: the colonial anxieties of the Troubles and the self-sabotage of Brexit, which was brought to pass, at best, by protest vote, and at worst, with racist motives or a macho-imperial sense of entitlement. The ironies of Rose’s shortcomings—the failure to reconcile his own ideology, how his account offers no dialogue and centers his own voice, how he tasks his daughter with being his reason to live while telling others that ‘she owes me nothing—make this book not only nuanced and affecting but historiographical. It reads truer than memoir…. As a device, the letter is problematic, especially when Rose details events and conversations his daughter was present for (and when he describes sex stains he and her mother left on the carpet). Another problem is that Rose…writes like a novelist, albeit one I am recommending … But the unbroken personal account gives us access to a beautifully fraught psyche … His story becomes a state-of-the-nation novel, in elegiac prose.”

“This is a risky, almost preposterous literary gambit. Monson presents himself in a fully earnest fashion, rips open his heart to expose all his flaws, and then asks you to care deeply about what is clearly a doomed and ultimately insignificant crisis. The book’s emotional eddies and nostalgic reveries add up to a trite point about media, masculinity, and violence, and still Monson is only partially willing to implicate himself in what he observes, repeatedly reminding us, for instance, that he feels appalled by the January 6th rioters. Reading Predator sometimes felt like reading a tweet thread from the most annoying white people on Twitter—the type who feel the need to very loudly condemn and apologize for their backward brethren. And yet, against all odds, Monson pulls this off. Predator is not a pleasant read, but its moral oscillations and reveries fully capture white guilt in its most cringeworthy form. This, at least in my reading, is intentional … Monson does not have a fixed relationship with this violence. He condemns it but he does not dismiss it, nor does he really believe that he has expunged it fully from himself … Problematic-male confessors, it turns out, are always talking to one another…When I was in my late twenties, I wrote a novel about a down-and-out Korean American man living in San Francisco who was obsessed with the Virginia Tech massacre. (The title came from a song by Silver Jews, a band that Monson quotes in Predator.) The point wasn’t to theorize something about toxic masculinity, or even to get people to understand where I was coming from. The desire was more formal in nature: how do you craft sentences that reflect you at your most depraved? Can the sequence of words you write on the page make the reader love you, despite everything you’re telling him about yourself? I am not sure if I succeeded in that task, but Monson, by spooling out the neuroses of the once violent, but now domesticated liberal man…and never shying away from his own lameness, certainly has.”

–Jay Caspian Kang on Anders Monson’s Predator: A Memoir, a Movie, an Obsession (The New Yorker)