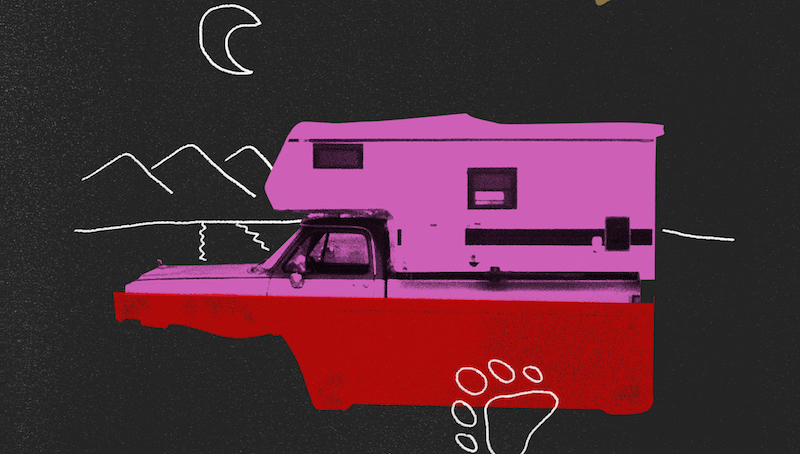 That evening, a literary crowd packed the New School’s auditorium, eager to hear the news and celebrate some of the best writers on the globe. “Right now we are experiencing a cultural and political contraction on a massive scale,” said Carmen Maria Machado, winner of the John Leonard award for best first book in any genre, “It has been this way before; it will be this way again. All we can do is fight it; to fight it, we need to put words to it. This is what artists do. This is what critics do.” Next up: Charles Finch, winner of the $1K Balakian award for excellence in reviewing, who also spoke of the value of critical work. “At this moment, we are painstakingly unknotting our society’s old false certainties about race, gender, and sexuality, and replacing them, not unopposed, with, in the words of one of my heroes, Marina Warner, validities, not verities. It is here, in stealing a march on the truths of the future, that criticism is uniquely valuable; uniquely political, even, perhaps.” John McPhee, was there to accept the NBCC Sandrof award for lifetime achievement, accompanied by family and friends, including Sen. Bill Bradley. McPhee was introduced by Stacey Vanek Smith of NPR’s Planet Money, a onetime student, who noted that his New Yorker editor had called him a “self-cleaning oven.” McPhee’s remarks were sculpted and “Creative nonfiction is not making something up but making the most of what you have,” he noted,  “Or, as my daughter Jenny said last week, ‘It’s not fake news.’” By the evening’s end, Joan Silber captured the energy in the room as she accepted the NBCC fiction award, quoting Ursula Le Guin: “Other writers are not your competition. They are your sustenance.” 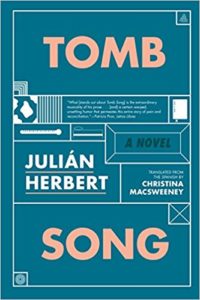 Tomb Song, the first book by the esteemed Mexican writer translated into English, impresses critics with its autofictional chops.

“‘Who is Julián Herbert?’ sounds like it could be a title for one of his novels,” translator Christine MacSweeney tells Conversational Reading’s Scott Esposito. “He’s a Mexican poet, novelist, essayist, musician (he is indeed the lead singer for a band called Las Madrastras), he lectures, leads workshops in cultural programs… It would probably be easier to list the things he doesn’t do. He was born into poverty in Acapulco in 1971, and much of his early life was spent travelling around Mexico with his mother, who supported her family by the only relatively steady work open to her: prostitution. But she also seems to have inculcated her son with an intense love of literature, and a very edgy way of looking at life.”

A mother lies dying. Is she really sick? Will she survive? Is the writer by her side a son, a man or merely another doomed citizen? These are the questions that fuel the new novel Tomb Song’s rollicking, surprising and deft flurry of chapters, some as short as a paragraph, others spooling along for lush pages of artfully rendered set pieces. Mexico’s Julián Herbert, known previously mostly as a poet, is now — with this playful experiment of memoir, fiction, humor and tragedy — among the more interesting and ambitious prose stylists of our time.

“Tomb Song is an inherently contradictory book,” writes Tobias Carroll (Minneapolis Star-Tribune). “The experimental aspects of its structure have a playfulness to them, which in turn contrasts with the (literally) life-or-death stakes at its core. That it’s also able to fold in such disparate elements as a meditation on perceptions of the Cuban revolution, ups and downs of a small-town soccer team and explore the nature of parenthood serves as a testament to Herbert’s narrative deftness. This novel sprawls, but never loses sight of the human connection at its core—and it’s all the more moving as a result.” 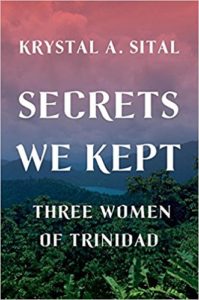 Krystal A. Sital, Secrets We Kept

This Caribbean author’s stark and compassionate memoir digs into the sufferings of three generations of women living within patriarchal confines in Trinidad.

When Krystal Sital’s grandfather Shiva Singh suffers a cerebral hemorrhage, her grandmother Rebecca, after 53 years of marriage, reacts with calm indifference. Sital, who reveres her tall, strong and generous grandfather, with his white hair and “skin the color of a sapphire sky,” spends much of her suspenseful memoir…elucidating this response.

Barbara Spindel (Christian Science Monitor) writes, “As the book’s subtitle, ‘Three Women of Trinidad,’ suggests, the author allies herself with her mother and her grandmother, and Secrets We Kept is suffused with a fierce compassion for them. Her feelings for the family patriarchs cannot help but be forever altered. ‘As I learn about the men in my life—my father, my grandfather—men I’ve been enamored with and admired, they take on dimensions I’ve never imagined.’ They are, she writes, ‘fathers, yes. But also husbands. Perpetrators.’”

Kathryn McLamb (PopSugar) concludes, “Not only is Secrets We Kept an enthralling memoir through every page, but it brilliantly reveals the gender inequality that too commonly takes place throughout the Caribbean and around the world.” 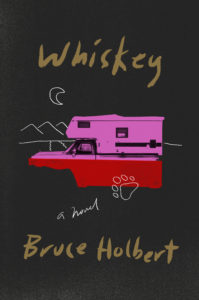 The latest novel by this Eastern Washington author is dubbed a “blackly comic, booze-bruised addition to the Northwest canon.”

Carolyn Lamberson (The Spokesman Review) notes, “[Hobert] grew up in and around Grand Coulee, and graduated from high school there. His father’s family homesteaded a ranch across the Columbia River from the Colville Indian Reservation. His mother’s family moved there to work on the Grand Coulee Dam during the Great Depression. They may not have always lived in Grand Coulee, but was very much home base. And it’s the kind of place that leaves a mark. Holbert has a vivid memory of himself as a 3-year-old, in his dad’s arms and looking over the spillway of the dam. He dropped the bottle he was drinking from and watched it plummet 550 feet over the spillway to the river below. He quit drinking from a bottle after that.”

“The violence in this rangy, brilliant narrative is often grotesque, but this excess is tempered by dry humor, wonderful dialogue, and dark wisdom,” notes Publishers Weekly. 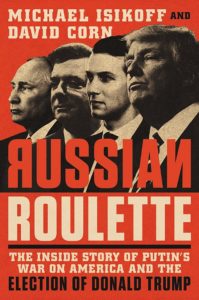 Michael Isikoff and David Corn, Russian Roulette: The Inside Story of Putin’s War on American and the Election of Donald Trump

“Isikoff was the first reporter to reveal that there was a U.S. intelligence investigation into Russian ties to a figure in the Trump campaign — Carter Page,” explains NPR’s Terry Gross in her interview with the authors. “Corn was the first to reveal the existence of the infamous Russia dossier, the unverified collection of reports alleging connections between the Trump campaign and Russia compiled by former British intelligence officer Christopher Steele.”

Isaac Chotiner (Slate) sketches the parameters of the book: “Corn, who is the Washington bureau chief for Mother Jones, and Isikoff, the chief investigative correspondent for Yahoo! News, are longtime reporters and previously co-wrote a book on the Iraq war. Their latest tries to trace the story of Donald Trump and Russia, which goes back years before the 2016 campaign. The book also examines the response of the American government to Russian hacking, and the growing investigation into Trump and his associates.”

Steven Lee Myers (New York Times) writes, “Russian Roulette is… not an investigative breakthrough as much as a new contribution to that well-worn genre: the granular, source-on-the-wall election diary. On that score, they have produced the most thorough and riveting account so far—riveting, that is, as long as you don’t mind falling into paroxysms of political outrage and dismay.”

“For those of us who’ve tracked the Russia story closely, reading this account may induce something like a mild case of PTSD,” writes Mary Louise Kelly (Washington Post). “Here again are all the figures who fleetingly became household names in America: Sergey Kislyak, Corey Lewandowski, Natalia Veselnitskaya, Guccifer 2.0. Here again are all the truly, staggeringly bonkers moments we have collectively lived through.” 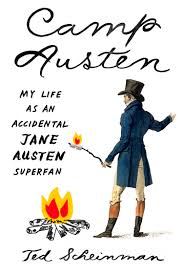 The son of an Austen scholar is embedded with a group of superfans at a Jane Austen summer camp, leading to delicious tales told with wit.

Steve Donoghue (Christian Science Monitor) writes, “His exploration of that world may have started out with the sardonic remove of a David Sedaris, but it quickly warms to a kind of ‘embedded’ Jane Goodall-style anthropology in which the observer comes to identify so closely with the observed that the distinctions lose their meaning. Camp Austen is a sharp and wholly affectionate portrait of author-fandom raised to a manic pitch.”

Publishers Weekly calls it “a loving and often humorous tribute to the Janeites of the world.”

His deeply loving and mocking voice feels wonderfully relatable to this twenty-first-century Austen fan. (Most of the time—I do think he may thrill in the exceptionalism of his male Janiesm more than some, or at least one, of his readers will.) But ultimately, Camp Austen is not about one man or one fan or one Jane Austen Summer Camp. It is about the delight of loving great books, and it is itself a delight.