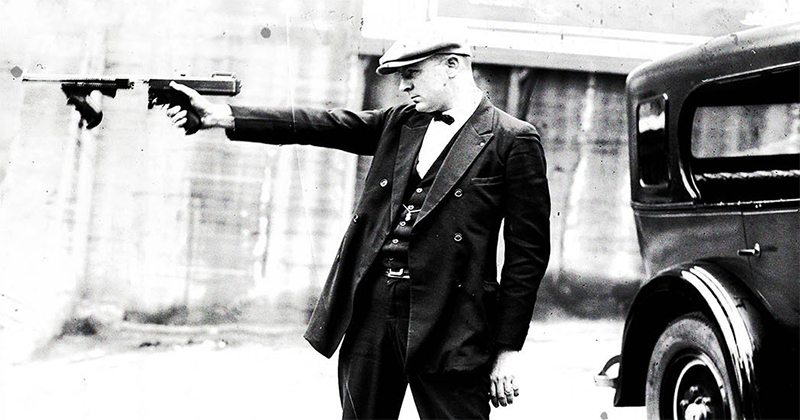 Layli Long Soldier’s first poetry collection, Whereas, described by judges as “a grand reckoning with language and history,” wins the $75,000 PEN/Jean Stein book of the year award. The $25,000 PEN/Robert Bingham award for debut fiction goes to Jenny Zhang’s Sour Heart, a book that “enlarges the reader’s understanding of the world with a voice so run through with lively contradiction it is as tender as it is rough, as mature as it is youthful, both urgent and cool.” The late Ursula K. Le Guin’s No Time to Spare wins PEN’s “art of the essay” award. “Language lives longer than people and therefore its permanence is vital,” notes Edna O’Brien, honored by PEN for achievement in international literature. “It moves us from one generation to the next; it’s immortal.” 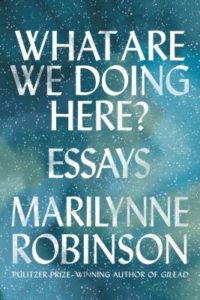 Marilynne Robinson, What Are We Doing Here?

A new collection of essays by the Pulitzer prize winning novelist and public intellectual, drawn from lectures at churches, seminaries, and universities.

“To call these essays demanding does not do them justice,” writes Parul Sehgal (New York Times)

Robinson’s great hero, the Puritan preacher and philosopher Jonathan Edwards, said we should never permit a thought that we wouldn’t indulge on our deathbeds. With few exceptions, this collection meets that (insane) standard; it’s high-minded to the hilt, and rigorous, too. I was wheezing at the end of every chapter. I was also moved, exasperated, put to sleep more than once and undone by it. It’s a dense, eccentric book of profound and generous gifts.

In What Are We Doing Here?, Robinson frequently rambles, layers on obscure references, heads off on extended tangents. She delights, too, and inspires. But, in the end, she buries these gems under mountains of impenetrable text. That is a shame, because we really do need her gems, now more than ever.

“Heady and forceful, composed and serious, Robinson warns readers against despair and cynicism, encouraging us instead to embrace—ideally, in her opinion, through ‘Christian humanism’—‘radical human equality and dignity,’” writes Kathleen Rooney (Chicago Tribune). 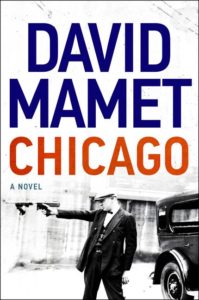 The award winning playwright and screenwriter sets his first crime novel in his home town, during Prohibition. “ You grow up in Chicago and people are talking about gangsters all the time,” he tells Vulture’s Sarah Weinman. “Here’s where Nails Morton’s horse was shot; there’s the Holy Name Cathedral where they shot Dion O’Banion. I went to school across the street from the garage where they had the Saint Valentine’s Day Massacre. You were always aware of it because it’s all part of the myth. ‘My uncle knew Al Capone’: Everyone says that.”

“Chicago. David Mamet,” notes Scott Simon (NPR). “Maybe that’s all that needs saying to introduce the first novel in more than 20 years by the celebrated and controversial playwright and screenwriter, who has so often made the city a signature in his works. It’s a story of the mob era: hits ordered and adversaries iced; hooch in trucks which winds up in teapots; gunsels, madams, made men and molls.”

“Chicago,” writes Rick Kogan (Chicago Tribune) is “a Prohibition-era tale of murder and mystery, gangsters, love, friendship and betrayal. It ‘stars’ two hard-boiled reporters for the Chicago Tribune and is peppered, as is all of Mamet’s work, with hustling, humor and heartbreak. And, of course, that distinctively fast, clever, edgy dialogue that has come to be known as Mamet Speak.”

Mr. Mamet’s novel is alive and interesting, but enjoyment for many readers may pivot on historical veracity: After all, “mametsplaining” requires that the reader trust the narrator, much as a poker player has to trust the dealer or a speakeasy habitué the bartender’s honest pour. Mr. Mamet’s narrator even raises the issue: “The constant practice of doubt as to the material, and disbelief of all human testimony, created, in reporters, and in the judges, the cops, the nurses, and others of the tribe of the night, various instincts.” The degree to which Mr. Mamet’s fans are of that tribe, and share such skeptical instincts, will influence whether they buy into his narrative. 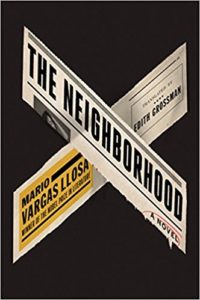 The 2010 Nobel laureate’s latest novel is a scandal-laced thriller set during the decline of Alberto Fujimori’s Peru. “In those periods of tension, of terrible aggravation, eroticism often springs up as a compensation, no?” Vargas Llosa explains to the New York Times’ Marcela Valdes. “It’s a way of distracting oneself, of losing oneself. It’s like the idea of the end of the world. The world is ending: All sins are allowed.”

Dwight Garner (New York Times) calls The Neighborhood “pulpy.” “This novel, his 18th, is a broad entertainment, so broad that when the novel’s villain appears in the form of a tabloid newspaper editor you know him not merely because of his ‘ratlike little smile.’ There’s also his ‘shrill, high voice’ and his ‘small shifty eyes,’ his ‘rachitic little body’ and his yellow platform shoes, his ‘damp’ handshake and his nicotine-stained teeth. Also, he ‘smelled of underarms or feet.’ He’s a troll’s troll with a pimp roll, his shoulders swaying when he walks.”

“Llosa’s lively novel belongs in the pantheon of guilty pleasures by Nobel winners,” Publishers Weekly notes. “Reminiscent of Pynchon’s Inherent Vice in its use of genre fiction for higher purposes, this is an audacious and skillful novel. “ 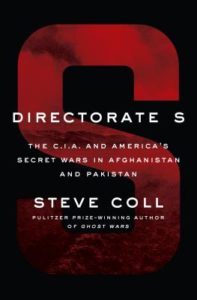 “Directorate S is an account of a slow-motion military and policy disaster,” writes Graeme Wood (Washington Post). “It is sometimes as affectless as a wire report, but the unadorned facts in its narrative more than suffice to stoke bafflement and despair. After 17 years of war in Afghanistan, more than 100,000 Afghans are dead, and the Taliban and the Islamic State are competing to inflict wanton violence on civilians in the capital. The only thing U.S. policymakers know for sure is that the situation will degrade fast if we leave. It will probably degrade slowly and expensively if we stay. Previous attempts at discreet draw-downs have not, Coll notes, been dignified or had positive results. In 2014, at a ceremony marking the end of a phase of U.S. combat in Afghanistan, ‘the ceremony program noted that attendees should lie down flat on the ground in the event of a rocket attack.’”

Andrew Meier (Bookforum) notes, “Coll is interested, above all, in the story of the CIA’s grievous misadventures in Afghanistan. The book is long—35 chapters—but Coll goes far beyond a behind-the-scenes ‘tick-tock’ that toggles among CIA headquarters, the White House, and the far-off battles that millions of Americans viewed nightly in Wolf Blitzer’s ‘War Room.’ Directorate S delivers a magisterial chronicle, so much of it newly reported and deeply nuanced. Coll shuns literary varnish, relying instead on windowpane clarity to achieve his complex exposition. The narrative, which follows the calendar, replays the events blow by blow, in the style of a Hollywood blockbuster.”

Directorate S takes readers deep into the malevolent intrigues of spycraft with its cast of colorful characters: there is the Dunhill smoking spy chief Ashfaq Kayani; the fitness-obsessed, water-guzzling General David Petraeus; special envoy Richard Holbrooke, who calls his diplomacy “jazz improvisation”; not to mention such Taliban commanders as Omar, who makes off over the Pakistan border on a motorbike. The latter’s escape, Coll astutely notes, was a ‘lost opportunity’; had he been caught, it could have changed everything. 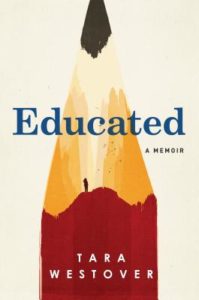 Westover’s first book, a memoir, describes how she was raised in an isolated Idaho valley and home schooled in brutal fashion by fundamentalist parents, then studies at Harvard and earns a Ph.D. at Cambridge. And it’s gorgeously written. How did she learn non-academic writing? “I started listening to The New Yorker fiction podcast, with Deborah Treisman, which is just amazing, because you have these writers, they come on, they pick a short story by another writer, they read it, and then they discuss it,” she tells Vanity Fair’s Erin Vanderhoof. “They point out all the little tricks, the writer’s mechanisms that they use to make things work. Each chapter [in Educated] is structured like a short story, because I was so obsessed with them.”

“Tara Westover’s one-of-a-kind memoir is about the shaping of a mind, yet page after page describes the maiming of bodies—not just hers, but the heads, limbs, and torsos of her parents and six siblings, too,” writes Ann Hulbert (The Atlantic). “The youngest child in a fundamentalist Mormon family living in the foothills of Buck’s Peak, in Idaho, she grew up with a father fanatically determined to protect his family against the ‘brainwashing’ world. Defending his isolated tribe against the physical dangers—literally brain-crushing in some cases—of the survivalist life he imposed was another matter.”

Dan Cryer (Newsday) concludes, “Whether narrating scenes of fury and violence or evoking rural landscapes or tortured self-analysis, Westover writes with uncommon intelligence and grace. Educated recounts one of the most improbable and fascinating journeys I’ve read in recent years.”

Jane Ciabattari, author of the short story collection Stealing the Fire, is a former National Book Critics Circle president (and current NBCC vice president/events), and a member of the Writers Grotto. Her reviews, interviews and cultural criticism have appeared in NPR, BBC Culture, the New York Times Book Review, the Guardian, Bookforum, Paris Review, the Washington Post, Boston Globe, and the Los Angeles Times, among other publications.
Share:
© LitHub | Privacy
Loading Comments...
%d bloggers like this: