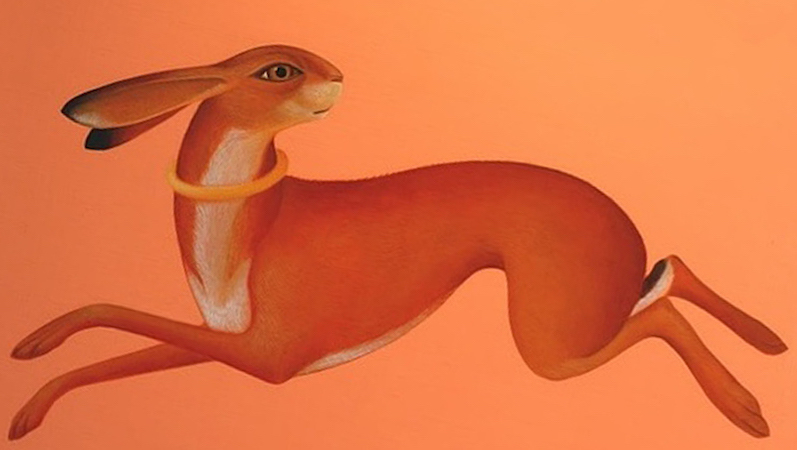 Elizabeth Strout is brief in her remarks when her Anything Is Possible is named winner of the $20,000 Story Prize: “Oh. Wow. Thank you!” The judges are eloquent about her collection: “The intelligent prose is seemingly humble but elegant in its subtlety and enchanting in its overall effect. The blade of her wit is so sharp, you barely feel it until after the slice. Strout is a specialist in the reticence of people, and her characters are compelling because of the complexity of their internal lives, and the clarity with which that complexity is depicted. It is a sublime pleasure to read her work.” Video of the awards ceremony at The New School, with readings by Strout and finalists Ottessa Moshfegh and Daniel Alarcon, and their conversations with Story Prize founder Larry Dark, in which Strout describes how she learned to write “scenes with a heartbeat to them,” here. Dark also announces that he’s starting work on an anthology of 15 years of The Story Prize to be ready for next year’s ceremony, with the works of the fourteen winners to date, including Edwidge Danticat, Rick Bass, Claire Vaye Watkins, Elizabeth McCracken, and George Saunders.

Jesse Ball writes a novel that makes David Mitchell cry, Thomas McGuane puts his best stories in an omnibus collection, Mexican author Julian Herbert’s first book translated into English is a “genre-bending trip through memory,” Ramona Ausubel offers another group of fabulist stories, and Kent Anderson brings back Hanson, an Oakland cop who sees himself as an “armed social worker.” 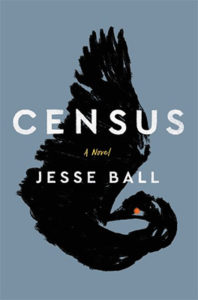 Ball’s late brother Abram, who had Down syndrome and died at 24, inspired his fifteenth book, which begins with an introduction that notes of Abram, his “magnificent and beautiful nature never flagged.”

When asked by The Guardian, “What’s the last book that made you cry?” novelist David Mitchell responded:

Census by Jesse Ball, a Chicagoan writer. It’s a near-uncategorizable kind of fable about, yet not about, the author’s late brother, who had Down syndrome. I finished it on a plane yesterday in economy class, in the middle seat of a row of three, so there was nowhere to hide. I had to pull my woolly hat over my face and looked like a bank robber who’d forgotten to cut out the eye-holes.

“Given its title’s bureaucratic tenor and Ball’s body of work, it’s not surprising that Census is partly funneled through Kafka-though it’s Kafka imported to the American road story,” notes M. Milks (4columns). “The setup-nameless father and nameless son on a journey across a grim landscape-evokes Cormac McCarthy’s The Road, though in this case with car and without apocalyptic calamity.”

Drew Nellins Smith (The Washington Post) concludes, “Though Census reads, at times, like a protracted parable, it eschews tidy lessons. The result is an understated feat, a book that says more than enough simply by saying, ‘Look, this is how some people are.” 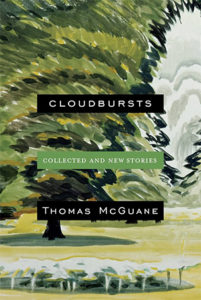 Sam Sacks (Wall Street Journal) writes, “Mr. McGuane is best known for his slapstick druggie novels from the 1970s like Ninety-Two in the Shade, but this collection demonstrates his rewarding second-act enthusiasm for short fiction, drawing from the books To Skin a Cat (1986), Gallatin Canyon (2006) and Crow Fair“(2015). The comedy isn’t as gonzo but the essence of McGuane-ism is very much here: dry wit, wry confusion and prose as chiseled and striking as a Rocky Mountain butte.”

Gabe Habash (Los Angeles Times) notes, ” . . . at the most elemental level, the true pleasure of these stories is that page after page can be read for both plot and language. Compelling and sometimes astonishing events are rendered through prose that’s compelling and often astonishing. The stakes always feel high (characters can die and do die), and there’s no such thing as a not-funny McGuane story. The result is a continuous succession of storytelling delights.” 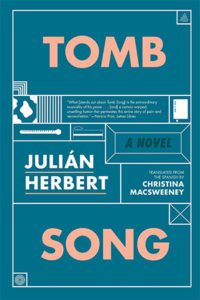 Guadalupe is dying of cancer, and her son Julian is by her side, churning up a mixture of memories, fantasies, perceptions and hallucinations. Mexican author Herbert’s novel, the first of his works available in English, translated by Christina MacSweeney, showcases his original voice. (Note to translators: I can’t wait to read his Bring Me the Head of Quentin Tarantino.)

“A portrait of life and death in Mexico, Tomb Song blends fiction, memoir and essays in a genre-bending trip through memory,” writes Maddy Foley (Bustle).

“In Herbert’s hands,” writes Scott Esposito (Conversational Reading), “the novel transcends its usual confines of fiction to embrace forms like memoir and essay. He is a writer about whom nothing should be taken for granted, an inveterate and playful line-crosser who has crafted his own unique and variable style.”

“Tomb Song is an inherently contradictory book,” notes Tobias Carroll (Minneapolis Star-Tribune) “The experimental aspects of its structure have a playfulness to them, which in turn contrasts with the (literally) life-or-death stakes at its core. That it’s also able to fold in such disparate elements as a meditation on perceptions of the Cuban revolution, ups and downs of a small-town soccer team and explore the nature of parenthood serves as a testament to Herbert’s narrative deftness.” 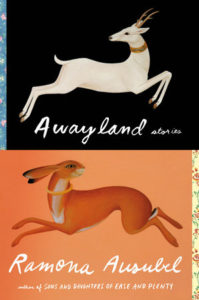 “The stories in Ausubel’s new collection are “galactic in scope, massive in scale, and universal in their flawless execution,” writes Chelsea Adelaine Hassler (PopSugar). “From Mars to the streets of the Midwest, Ausubel tackles modern mythology in a way that is utterly original and endlessly fascinating-and, at the end of the day, it just might teach you something about yourself.”

“To read an Ausubel story is to escape to another place, and yet it’s a place that’s familiar to us, one that’s filled with longing, regret, and love,” writes Laura Spence-Ash (Ploughshares).

Adam Morgan (Chicago Review of Books) calls Awayland an “inventive story collection that spans the globe as it explores love, childhood, and parenthood with an electric mix of humor and emotion.” 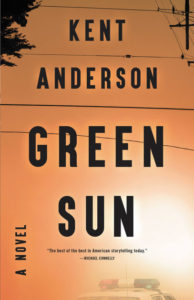 Like Hanson, Green Sun’s protagonist, Anderson served as a Green Beret in Vietnam, taught English in Idaho, and worked as a policeman in Portland and Oakland. (Hanson sees his police role as being an “armed social worker.”)

Erik Spanberg (Christian Science Monitor) compares Anderson’s writing to that of James Lee Burke, “blending pathos, violence, and corruption with long-shot hope and glimpses of natural wonder. Look no further than the opening paragraph, where Anderson sets a powerful scene. “‘It’s winter in Idaho, past midnight, and it should be dark, but the wind-driven snow crackles with lightning and shakes the clattering glassy branches of frozen trees,’ Anderson writes. ‘Green and blue curtains of aurora borealis flare and furl and curtsy across the northern horizon.'”

Anderson is adept at finding a terrible kind of beauty in the worst circumstances, which makes Green Sun difficult to put down even when it’s emotionally painful to keep reading. Above all, it’s a stunning meditation on power, violence and the intractability of pain, which Anderson seems to understand all too well. “Pain takes us to places we cannot anticipate, to events we have managed to completely forget, returns us to worlds we hadn’t known we ever visited,” he writes. “Pain bends our attention to what we would ignore.”