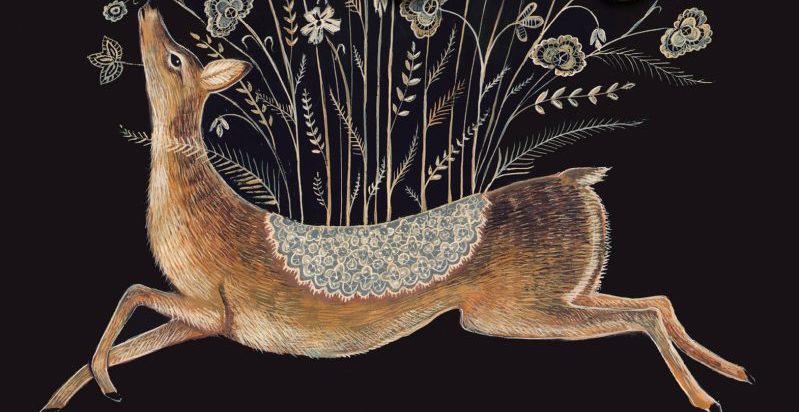 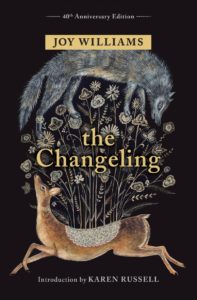 “If you’ve read Williams’s sentences, which streak across the mind with the fiery, otherworldly authority of comets, it might shock you to learn that they have a human origin. She was and is my favorite author, a lame epithet for someone whose fiction has caused my bones to blossom … Forty years after its first publication, The Changeling feels at once unprecedented and eerily familiar. Readers who discover it in 2018 may be surprised to feel a primordial déjà vu; a tingling where their own antlers might have been, once upon a time. Every great book shape-shifts with its reader. The Changeling does something wilder still: it generates its own autonomous magic, one that feels wholly independent of the reader and her moment … Part of the pain of The Changeling is feeling the years pass. Like no book I have read, it is illumined by the spark of life, the life that wears a thousand skins. Its wisdom is unparaphrasable.”

-Karen Russell on Joy Williams’ The Changling (The New Yorker)

“Tolstaya is divinely quotable—slangy, indignant, lyrical, crude. She picks you up—you’re light as a feather—and carries you along. You’re blown this way and that, cuddled and cast down, mocked and treasured. You don’t know where you’re going. None of it makes a lick of sense. It’s all detritus. It’s all sublime. The important becomes unimportant…The unimportant becomes…something else …This is Tatyana Tolstaya, the swerve and cackle, the breeziness and dark depths, the whoosh of time passing, the torrents of language and the offhand perfect touch—the dust on the road that falls like flour, the two lovely bream, mother and daughter, in the fishmonger’s window, the three-square-meter living space in a communal apartment. She has been compared to Chekhov. Absurd: Chekhov, that sorrowful physician, that delicate ironist. Tolstaya barrels by him and knocks him in the ditch … John Banville has written: ‘It is impossible to communicate adequately the richness, the exuberance, and the horrid inventiveness of The Slynx.’ The man couldn’t be more correct. It is difficult to convey the gaiety and breadth of Tolstaya’s witchy craft.”

“By pursuing her tales of woe beyond riffs and rants, Crosley elevates these foibles above the anecdotal … Sanctimony is toxic to personal essays, and Crosley wields its antidote, self-deprecation, with the skill of a practiced EMT … Crosley’s best essays combine her sparkling verbal facility with a willingness to expose and explore more personal issues … There are several negligible pieces whose inclusion hints at a desperation for material, but her two ventures into personal medical history are keepers … She has that rare ability to treat scrapes with sardonic humor and inject serious subjects with levity and hijinks with real feeling — a sort of unlicensed nurse to our souls.”

-Heller McAlpin on Sloane Crosley’s Look Alive Out There (NPR)

“The Recovering is in its way a successful synthesis of [William] Styron’s and [Al] Alvarez’s masterpieces … Jamison’s greatest strength is her ability to show honestly the outrageous mental gymnastics every alcoholic masters in the attempt simultaneously to quit drinking and, above all, to continue drinking … Jamison’s descriptions of drinking are so well turned and evocative that those who have just quit drinking, who haven’t found their footing as nondrinkers yet, might find them triggering. But this too is a compliment … The prose is clean and clear and a pleasure to read, utterly without pretension. Although the subject is dark, Jamison has managed to write an often very funny page-turner … I applaud Jamison for not romanticizing drunks, for her frankness about the destruction that alcohol and drugs can wreak on a great artist…But why not admit that booze has helped some writers find their best lines? Not because they wrote best drunk, but because the trauma of addiction might keep some nerves sensitive that otherwise become dull.”

“In Two Sisters, Norwegian journalist and writer Åsne Seierstad…tries to…turn the fanatical ghosts back into complex humans – by telling in intricate, compelling detail the story of one family dragged into Isis’s web of horror … In her exploration of how and why Ayan and Leila abandoned their home for a distant war, Seierstad weaves a complex picture of their lives as young Norwegians … Seierstad also teases out the sense of alienation that a distinct and different heritage can produce in a homogeneous society – Ayan’s exploration of her roots and religion, Leila’s isolation at school … an unfolding human drama whose characters are compelling – from the strong-willed young women and desperate parents at the story’s heart to the shifting cast that surrounds them – womanising fundamentalists, well-meaning but clueless Norwegian teachers, the loyal Syrian smuggler with close ties to al-Qaida … There is no update on the whereabouts of Leila or Ayan, giving the reader some sense of the void their parents and siblings stare into every day, wondering what happened to them, the two bright girls from Oslo.”