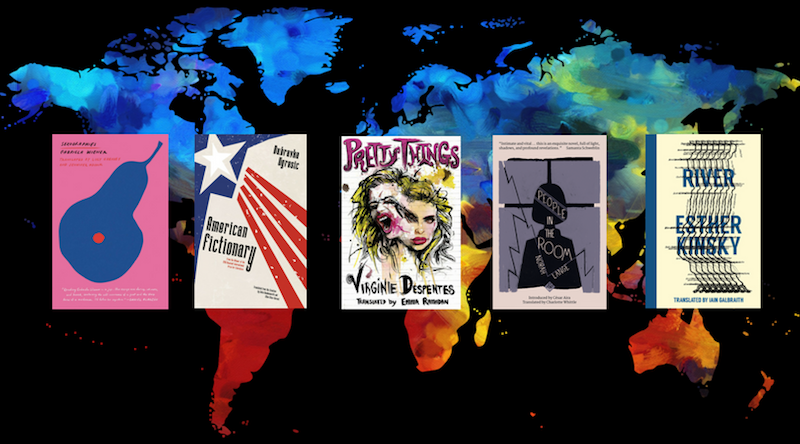 Sitting down to put this list together for #WiTMonth, I realized I had no idea where to begin. Some seriously amazing books by women have been published in translation recently. Last year gave us Ananda Devi’s Eve Out of Her Ruins (tr. Jeffrey Zuckerman), which won the 2017 CMLP Firecracker Award (and also knocked me flat), and Yoko Tawada’s Memoirs of a Polar Bear (tr. Susan Bernofsky), a lyrical reflection on displacement and belonging narrated by three generations of… polar bears (Tawada pulls off this unusual conceit with grace, aided by some truly exquisite phrases from Bernofsky). I’ve also been blown away by everything I’ve read of Marie Ndiaye (more on this soon), but I’m going to limit this post to new releases and titles I’m looking forward to in September or we’ll be here a long time.

Speaking of the latest and greatest, there’s probably little need for me to plug the lovely (and Man Booker International Prize-winning) Flights by Olga Tokarczuk, translated from the Polish by Jennifer Croft and out this month (on this side of the pond) from Riverhead Books. The novel deftly explores, in limpid, captivating vignettes, the spaces we inhabit—bodies, geographies, the expanse of the page—and the loves, fears, and wonder that inhabit us. If this book somehow isn’t already on your reading list, here’s a whole slew of reviews to pique your interest.

But enough throat-clearing, let’s get down to it. A few recent literary marvels that should not be missed: 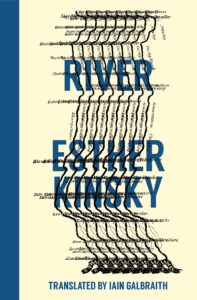 Translated from the German by Iain Galbraith

In a similar vein as Flights, but with a more Sebaldian gait, River traces the movements and musings of a woman who decides to trade the Rhine for the River Lea and moves to the suburbs of East London without anything resembling a life plan. The book’s narrator, in Galbraith’s hypnotic translation, stares unabashedly at her new surroundings—and its inhabitants, who are treated with what might best be characterized as clinical warmth—amassing “beautiful, silt-like layers of description and memory until it becomes difficult to know which is which” (The Guardian). In addition to this internationally celebrated novel and two others, Kinsky is also the author of three collections of poetry, and it shows: with the force of the river’s current moving it forward, this is a book that draws you in, slows you down, and reminds you what it’s like to really look at the world around you.

Double take: a thoughtful review from The Mookse and the Gripes. 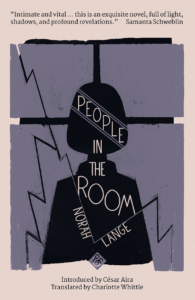 People in the Room by Norah Lange

Translated from the Spanish by Charlotte Whittle

People in the Room is the first book by the avant-garde Argentine author Norah Lange (too long overshadowed by the men in her literary circle, including Jorge Luis Borges and Oliverio Girondo) to be translated into English, nearly 75 years after its original publication. Way ahead of its time, this experimental novel traces a young woman’s growing fixation on three women who live shrouded in darkness in the house across the street from her. Watching their nightly routine from her window, she imagines different scenarios that might have led them to spinsterhood, and the sinister plans they might be hatching behind closed doors; when at last she gains entry to the house, she grows even more entangled in their lives and the lives she projects onto them. While the obsessive and elliptical monologue of the book’s narrator might have been hard to follow in the hands of a less artful translator, Whittle has done an extraordinary job conveying the urgency and pathos of the young woman’s voice, making for a very compelling (and unsettling) read.

Double take: Sarah Gilmartin on this “macabre Argentinean classic” for The Irish Times.

Translated from the French by Emma Ramadan

French writer, filmmaker, and punk rock feminist Virginie Despentes has been making major waves among readers of English lately: on the heels of Apocalypse Baby and Bye Bye Blondie (tr. Sian Reynolds), and King Kong Theory (tr. Stéphanie Benson), Frank Wynne’s translation of Vernon Subutex 1 (coming soon from FSG) was recently shortlisted for the Man Booker International Prize. Pretty Things elbows its way onto the scene with a penetrating look at the many different forms of violence—both public and intimate—that shape our society. The novel follows twins Pauline and Claudine as they hatch a plan to make Claudine (the “pretty” and image-obsessed one) famous by exploiting the vocal talents of her sister, who has never cared much for fashion or the spotlight. When the roles reverse and Pauline is the one who has to take over her sister’s identity, she discovers just how corrosive beauty and ambition can be. In Ramadan’s translation, Despentes’ prose crackles: bodies and sentences alike are fragmented, wrung out, hungover. This is a book to be devoured in one sitting—for a taste, check out this excerpt from the novel over at Lit Hub.

Translated from the Spanish by Lucy Greaves and Jennifer Adcock

The Peruvian writer Gabriela Wiener is best known for her work in what might loosely be described as “gonzo journalism,” though her pieces tend to go deeper and are less inclined to hide behind swagger or sarcasm as she moves between historical research, social critique, and the confessional mode. Wiener’s trademark may be her insightful, emotionally raw first-person accounts of sexual encounters that fall outside societal norms (swinging, polyamory), but she also writes with remarkable power about taboo issues surrounding women’s bodies (egg donation, female ejaculation) and marginalized communities (the prison system, violence against LGBTQ+ people). Translators Lucy Greaves and Jennifer Adcock do an excellent job rendering the interwoven registers that make up these texts, and of keeping the essays vibrant and engrossing. The result is a searingly smart, surprisingly moving, NSFW gem. Intrigued? You can read Wiener’s pieces about tripping on polyamory and ayahuasca over at Words Without Borders.

Translated from the Croatian by Celia Hawkesworth and Ellen Elias-Bursać

Presented as a series of dictionary entries on topics ranging from the concrete (“Jogging,” “Mailbox,” “Bagel”) to the conceptual (“Homeland,” Personality,” “Melancholy”), American Fictionary is a collection of vivid, insightful essays about the particularities of life in the United States, and also about Ugrešić’s experience observing these particularities as a stranger while the Yugoslav wars of the 1990s tore her world back home apart. “By writing,” Ugrešić tells us, “I have tried to put my scattered words (and scattered worlds) into some sort of order. That, I think, is why I called it a dictionary.” (Later, a typographical error turned the text into a “fictionary” and Ugrešić was disturbed to realize that it was, in fact, probably a better description of the illusion of order she had been clinging to.) The observations presented in American Fictionary are just as relevant today as they were back then, when Ugrešić (winner of the 2016 Neustadt Prize and author of more than a dozen internationally celebrated books) was living in Connecticut as a visiting scholar. This wise and witty collection—its balanced tone expertly rendered by Hawkesworth and Elias-Bursać—is essential reading for anyone trying to sort through this fraught, exhilarating, contradictory moment in which we find ourselves.