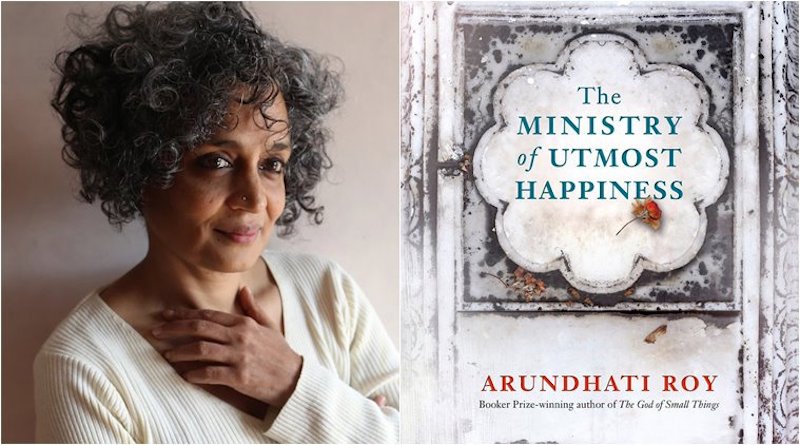 30 Books in 30 Days: The Ministry of Utmost Happiness

In the 30 Books in 30 Days series leading up to the March 15 announcement of the 2017 National Book Critics Circle award winners, NBCC board members review the thirty finalists. Today, NBCC board member Anjali Enjeti offers an appreciation of fiction finalist Arundhati Roy’s The Ministry of Utmost Happiness (Knopf).

Fans of Arundhati Roy’s superlative debut novel, The God of Small Things, winner of the 1997 Booker Prize, eagerly waited two decades for the release of her sophomore novel.

It was well worth it.

In The Ministry of Utmost Happiness, Roy spins another imaginative and evocative narrative spanning the regions of the Indian subcontinent, one that recounts the ways identity, community, and politics both collide and sustain one another.

The “ministry” at the heart of the book resides in a graveyard. The presiding minister is the unflappable hijra or trans woman named Anjam, formerly known as Aftab, who, after a celebrated career in entertainment, decides to leave the home she once shared with other hijras to embark on a different kind of life in the real world.

Anjam is an inveterate counselor and patient listener who possesses a keen maternal instinct. When she opens the doors to her humble sanctuary, outcasts, loners, and rebels in search of refuge collapse at her feet and begin the process of healing old wounds. Among her quirky and engaging charges are the beguiling S. Tilottamma, a freedom fighter caught in a messy love triangle; Anjam’s loyal assistant Saddam Hussein, who is hell-bent on revenge, and Musa Yeswi, a fickle and impassioned Kashmiri nationalist.
In the graveyard, among the comforting spirits of her own ancestors, Anjam experiences a rebirth, one that allows her to finally come to terms with a brutal act of violence from her past, and contemplate the shape the rest of her life might take.

Roy’s prose is symphonic. Each delicate note evokes a nuanced examination of love, grief, and trauma. With a light touch, she nimbly unpacks the forces of privilege, caste, and class, as well as the lingering repercussions of colonialism decades after partition. Her surprising choice of narrators—a landlord bemoaning unrequited love and a self-appointed town crier with a flair for writing—illuminate the ways in which mere bystanders become key actors in the destinies of others. In The Ministry of Utmost Happiness, Roy has penned an epic tale that braids the themes of memory, history and family, in a novel that confirms her status as a visionary and master storyteller.

Anjali Enjeti is an Atlanta-based journalist and organizer. She is the author of Southbound: Essays on Identity, Inheritance, and Social Change and the novel, The Parted Earth. She teaches in the MFA program at Reinhardt University.
Share:
© LitHub | Privacy
%d bloggers like this: