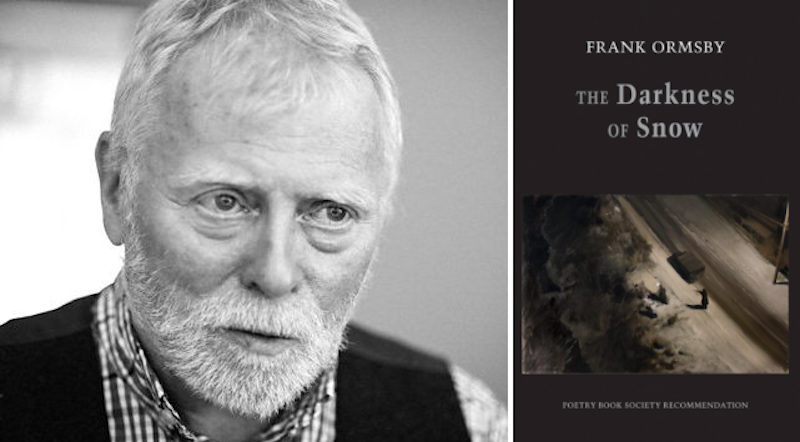 In the 30 Books in 30 Days series leading up to the March 15 announcement of the 2017 National Book Critics Circle award winners, NBCC board members review the thirty finalists. Today, NBCC board member Tess Taylor offers an appreciation of poetry finalist Frank Ormsby’s The Darkness of Snow (Wake Forest University Press).

“Where I grew up the fields had names,” begins one of the sections of Frank Ormsby’s lucid, funny, and also bittersweet book of poems. Ormsby, a contemporary of Paul Muldoon and Michael Longley who spent his career teaching high school in downtown Belfast, now offers up a late-life collage of what he calls “practical affections.”

These are poems of memory and survival, which cast wry eyes both on childhood (“Altar Boy Economics”) as well as the new mysteries of living Parkinson’s.  In poems that are “strangely human and visible all the way” Ormsby’s verses skirt both sadness and violence: they take in the unmarked graves of others’ babies, even as they glimpse the “faults in the self.” They study Irish paintings and savor the “sweet gravy” of a friendship that grounds, but they also hear the wind passing through willow trees planted for the dead. They begin in the Northern Irish counties of Ormsby’s youth, and end in the testimonies of the war tribunal.

All in all, the bright clarities in these verses are deceptively simple—short fables or fleet beams that leave an eerie afterglow. If these poems are durable, they are marked by the fragility of things.  Like the Northern Irish peace, they feel hard earned. Every verse, alive with deft wit, also recalls some mortal margins, or, as Ormsby puts it, plays also “the music of last things.”

Tess Taylor’s chapbook of poems, The Misremembered World, was selected by Eavan Boland and published by the Poetry Society of America. Her poetry and nonfiction have since appeared in The Atlantic, Boston Review, Harvard Review, The Times Literary Supplement, and The New Yorker. The San Francisco Chronicle called her first book, The Forage House, “stunning” and it was a finalist for the Believer Poetry Award. Her second book, Work and Days, was named one of the year’s 10 best books of poetry by the New York Times. Tess is on air poetry reviewer for NPR’s All Things Considered, and has just completed a term as the Distinguished Fulbright in residence at the Seamus Heaney Poetry Centre of Queens University Belfast.

Tess Taylor grew up in Berkeley, California, where she led youth garden programming at the Berkeley Youth Alternatives Community Garden and interned in the kitchen at Chez Panisse. In her twenties, she dropped out of Amherst College to become a translator and chef’s assistant at L’Ecole Ritz Escoffier in Paris. An avid gardener and cook, she is also an acclaimed poet. Her chapbook The Misremembered World was selected by Eavan Boland and published by the Poetry Society of America. Her work has appeared in The Atlantic, Boston Review, Harvard Review, The Times Literary Supplement, and The New Yorker. The San Francisco Chronicle called her first book, THE FORAGE HOUSE, “stunning” and it was a finalist for the Believer Poetry Award. Tess is currently the on air poetry reviewer for NPR’s All Things Considered, and was most recently visiting professor of English and creative writing at Whittier College. Her second book, WORK AND DAYS, was published in 2016. Her third book, RIFT ZONE comes out April 2020.
Share:
© LitHub | Privacy
%d bloggers like this: