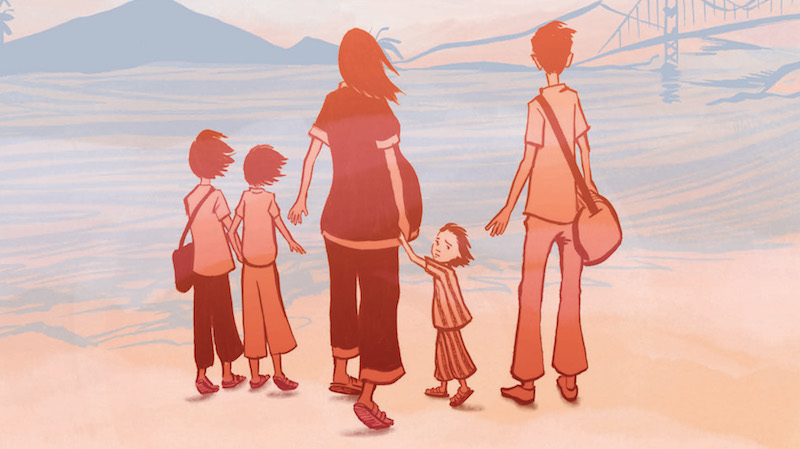 In the 30 books in 30 days series leading up to the March 15 announcement of the 2017 National Book Critics Circle award winners, NBCC board members review the thirty finalists. Today, NBCC board member Anjali Enjeti offers an appreciation of autobiography finalist Thi Bui’s The Best We Could Do (Abrams).

When Thi Bui gives birth to her first child, a son, she is overcome with a kind of empathy for her parents that she’d not felt before, and wonders if there’s a way she can now bridge the vast emotional void between them. She begins by taking an oral history for a graduate school project and then travels back to Vietnam, her first trip to her birth country since 3-year-old Bui, her two siblings, her father and very pregnant mother fled the country in 1978, after the Vietnam War, to rebuild their lives on American soil.

What Bui discovers about her ancestral roots is the basis for her stunning debut graphic memoir, The Best We Could Do. The book is a scrupulous investigation into her family’s history, starting with her dapper paternal great-grandfather who arrives at a small village in the 1930s looking for work when Vietnam was then French Indochina. It takes her through the 1940s, after France surrenders to Nazi Germany and Japan occupies northern French Indochina, and continues after World War II, when the French return and fight to reclaim what they believe is still their colony (resulting in the first Indochina War) and through the U.S. involvement in The Vietnam War.

Her lineage is plagued with job insecurity, starvation, still births, domestic violence, the pillage of homes, mass killings by French and U.S. soldiers, sky-rocketing inflation and disease. By the time Bui’s family boards a boat to a refugee camp in Malaysia where her mother will give birth to her fourth child, and where the family will successfully apply for asylum to the United States, they will have spent years on the run in a war-torn land.

It’s hard to believe Bui had never drawn a comic in her life before embarking on The Best We Could Do. Each panel is a penetrating meditation on trauma, grief, and memory, and the narrative moves seamlessly across decades and continents. After extensively interviewing her chain-smoking, distant father, long-divorced from her mother, Bui comes to understand how his severe child-rearing tactics reflected the kind of terror he routinely experienced as a young boy. And that her hardened mother was once a fiery, independent student who rebelled against her French education by teaching herself how to write Vietnamese.

What Bui learns about her history and what her parents endured to give her and her siblings a different kind of life in the United States, shrinks the gulf between them, and lessens the guilt she feels for not being a good enough daughter. The Best We Could Do, is an exquisite illustration of how exhuming a harrowing history of colonialism and war can help heal and fortify relationships in the present, and ultimately alter the kind of legacy passed down to descendants.

Anjali Enjeti is an Atlanta-based journalist and organizer. She is the author of Southbound: Essays on Identity, Inheritance, and Social Change and the novel, The Parted Earth. She teaches in the MFA program at Reinhardt University.
Share:
© LitHub | Privacy
%d bloggers like this: