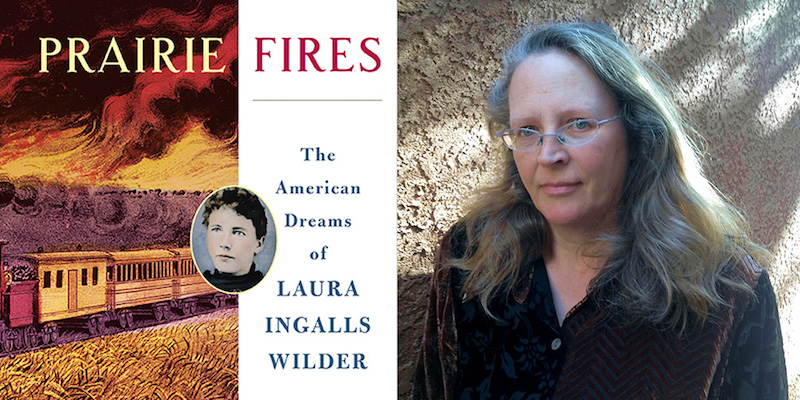 In the 30 Books in 30 Days series leading up to the March 15 announcement of the 2017 National Book Critics Circle award winners, NBCC board members review the thirty finalists. Today, NBCC board member Elizabeth Taylor offers an appreciation of Prairie Fires: The American Dreams of Laura Ingalls Wilder by Caroline Fraser (Metropolitan Books/Henry Holt).

In her extraordinary Prairie Fires, Caroline Fraser has written a captivating biography of Laura Ingalls Wilder, whose series of books—most famously Little House on the Prairie—captured self-sufficient pioneer life in a sepia tone. Wilder’s wildly popular Little House series was a “profound act of American myth-making and self-transformation” by a woman who had re-imagined her frontier life as epic and uplifting, with disappointment and loss transformed into parable.

Wilder projected her vision of the West and came to see herself as the embodiment of it. Reading about Wilder’s idyllic world where Pa’s business never failed, food was plentiful, and disease and hardship were conquerable, one would never know that she worked as a seamstress in other people’s homes from the time she was nine years old. In contrast with the tableau Wilder created, Fraser draws on her own deep knowledge of westward expansion and captures the full arc of Laura Ingalls Wilder’s life in three acts: poverty, struggle, and reinvention.

Wilder’s daughter, Rose Wilder Lane, played an important role in her life. Lane, a tabloid journalist, had encouraged her mother to earn money by writing newspaper columns. It was not until after the stock market crash of 1929, when Laura was 62, that she began the Little House books. The two had a vexed relationship, as Laura was thrifty and Rose was profligate, and while Laura was anxious, Rose suffered from wild mood swings. Fraser, working as a literary detective, takes on the enduring theory that Rose had ghostwritten the Little House books, and she meticulously shows how Wilder shared her drafts with her daughter to embellish and shape them, but that the writing was uniquely her own.

Mother and daughter were fiercely dedicated to their story of a hardworking pioneer family. Laura Ingalls Wilder yearned for what she imagined was a blissful past with Pa and Ma Ingalls, and she wrote with a wistful nostalgia that resonated with readers. Fraser expertly separates her life story from the one she represented in the Little House books, pointing out the crop failures, a failed hotel, and the many deaths in the family.

As the series expanded, Rose Wilder Lane emerged a troubled, depressed, and angry soul. In addition to her lucrative business writing fraudulent biographies of prominent figures such as Charlie Chaplin, she wrote bitter political screeds. A dark libertarian strain runs through the family, though undiscernible in the books. Through letters and documents, Fraser learned how vehemently Rose despised FDR and how they both railed against the New Deal, taxes, and big government.

Wilder had intended for her copyrighted literary property to move to her hometown in Missouri after her daughter’s death. Lane died childless, but she had been in the habit of recruiting young men to be her surrogate sons. When she died in 1968, she had made a 27-year-old man her sole beneficiary. He has been long forgotten as the Libertarian Party’s candidate for president in 1976.

That campaign and her daughter may be forgotten, but Laura Ingalls Wilder endures, and now future generations can read Fraser’s marvelous biography and understand her vision of how Ingalls dreams of the frontier. Caroline Fraser has brilliantly recast our understanding of Laura Ingalls Wilder’s life and times, and affirmed her influence in shaping the myth of the iconic West.

Past President of the National Book Critics Circle, Elizabeth Taylor has chaired multiple Pulitzer Prize juries and is Co-Editor of The National Book Review and Literary Editor at Large of the Chicago Tribune.

Elizabeth Taylor, Literary Editor at Large of the Chicago Tribune, has served as President of the NBCC. The co-author of American Pharaoh, she edited both the Books and Sunday Magazine sections of the Chicago Tribune, and was a national correspondent for Time magazine, based in New York and then Chicago.
Share:
© LitHub | Privacy
%d bloggers like this: