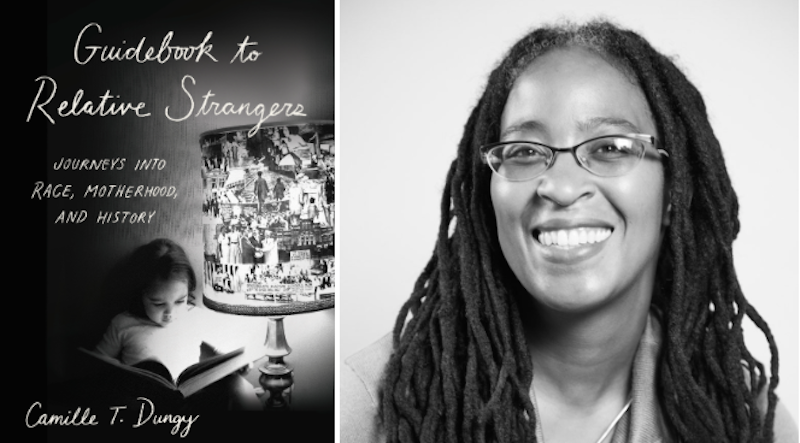 What does it mean to be black in America? We’ve had many—but never enough—books written about this in the past few years. We haven’t had one written by a woman, mother, and poet like Camille T. Dungy, whose Guidebook to Relative Strangers takes a lyrical, nonlinear approach to the question of reconciling her race to her place in the world. Most of the pieces that make up this book involve the title’s journeys, trips that she takes with her young daughter Callie Violet as she attempts to speak truth about everything from wild plants and nourishment, to the power and freedom names can hold.

One of the fiercest chapters, “A Shade North of Ordinary,” has to do with a trip Dungy and her daughter make to Maine. “Maine’s history is my history, too” she writes in a deceptively casual tone, sharing milestones like the Webster-Ashburton Treaty of 1842 that ended a territory dispute between the U.S. and Great Britain and called for the suppression of the slave trade off the coast of Africa. “Let me repeat that last bit,” Dungy writes. “A bloodless border skirmish between lumberjacks in far northeastern Maine. . .led to a treaty that called for the United States to ‘effectually at once and forever’ commit to curtailing the demand for African slaves.”

In every journey she makes, Camille Dungy is the woman on whom nothing is wasted, a person who inhabits her body, skin, and soul, and also a keen artist whose sorrow at the world as it is never quite kills its beauty. Towards the book’s end, mother and daughter meet an older woman in Ghana. Callie, in this story an active preschooler, has been acting out a bit, and Dungy is embarrassed. The Ghanaian woman says “This one knows how to take care of herself. . .She’ll be okay, no matter what happens.” It is a benediction from one side of the horrific Middle Passage to the other. The water is wide, but Camille Dungy has crossed it with grace and truth.

Bethanne Patrick, one of Flavorwire’s “35 Writers Who Run the Literary Internet,” reviews frequently for The Washington Post and NPR Books. She is working on a memoir for The Counterpoint Press.