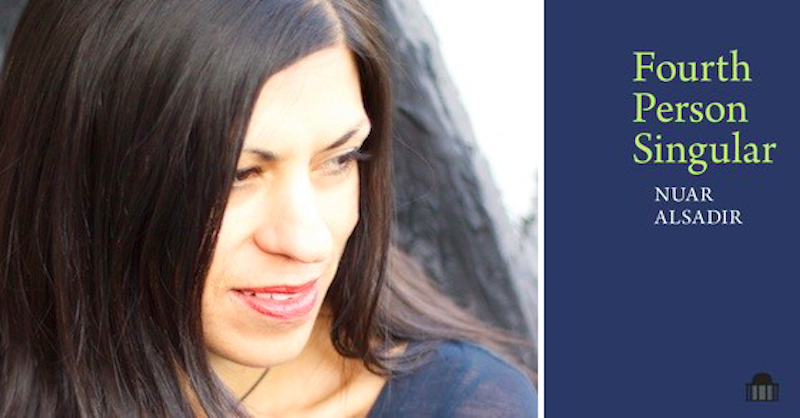 In her book about consciousness and lyrical selfhood, Fourth Person Singular, Nuar Alsadir, a poet and psychoanalyst, opens the work in mystery: “The door to my interior was propped open and a fly buzzed in.” You might be tempted to ask in response: if a fly can stumble in, what portion of the self wanders away? This kind of exchange, between the poet and reader, the self and other, prompts many of the questions that Alsadir proposes here. Once, on a subway platform column, Alsadir spied “Fuck Lyric” written in Sharpie and took the message as a sign of her struggle with “poetics, the figure of address, and larger questions of selfhood.”

Alternating between sequences of noncontiguous lyrical lines—Alsadir’s “little stabs at happiness”—and lyrical essays on poetics and addressivity, the book’s sections are an expression of her struggle and her notion that readers might be best served thinking of the lyric “as a form of ego splitting, becoming multiple, monument to a state of knowing and not-knowing.” This may also be a way for poets to understand to whom they write and of whom they speak when they write I or you.

Along the way, Alsadir riffs on Marianne Moore, Frank O’Hara, Roland Barthes, Steven Hawking, Emmanuel Levinas, and Louise Bourgeois, among others, to help her reimagine the poetic dictates: “I’m sure I’m breaking the rules — / let me hear them from the ones who care.” Some of the ones she may have heard from are Nelson in Bluets, Rankine in Don’t Let Me Be Lonely, and Howe in My Emily Dickinson. Like those books, Fourth Person Singular will not say, “isn’t X gorgeous?” Such demands, Alsadir suggests, are murderous to beauty.

Instead, in form and arrangement, Alsadir’s Fourth Person Singular will say that I and you are both “endless chain[s] of metonymic displacements” who meet in a fourth dimensional space-time lag. “Lyric address, then, occurs not only between an I and a you, but between separate parts of mind and different states of self.”

This slim volume defends and explodes lyric form. In the shards of poetic line strewn throughout, Alsadir bares herself. The lines are a “flurry of signals” meant to scramble the reader’s reception of herself revealed. Alsadir invites the reader to rearrange herself too: “You are the indefinite stranger. Can you hear me? I’m writing from elsewhere. This book is for you (whoever you are).” “Move toward what you believe in and the person you are steps through.”